We had the opportunity to take the all-new 2022 Chevrolet Bolt EUV equipped with Super Cruise out for a quick spin last week. While we’d prefer some more time with the vehicle for a more comprehensive review, our initial impressions are mostly positive, with a few exceptions.

The Bolt EUV, or electric utility vehicle (as if we needed another acronym, thanks, GM) isn’t replacing the Bolt EV, it’s going to be sold side-by-side with it. We suspect that’s going to cause many customers to cross-shop the two vehicles because they are so closely related.

Their dimensions are nearly identical, except the Bolt EUV is 6.3″ longer, and that allows for 3.1″ of more rear legroom and 2.6 more Cu. Ft. of passenger volume. The more spacious passenger compartment, combined with the optional sunroof as our vehicle had, made the interior of the Bolt EUV feel much more open and spacious than the Bolt EV.

However, other than the rear legroom and slightly larger passenger compartment, the vehicles are very similar. Take a look at how evenly matched these two vehicles are in every other dimension:

One dimension that had me curious was how the listed cargo volume of Bolt EUV was slightly less than that of the Bolt EV – it just didn’t make sense. So I asked GM’s Vehicle Chief Engineer of Battery Electric Vehicles, Jeremy Short, as he was one of our media-drive escorts.

I could see Short’s eyes roll back when I asked him how the EUV could have less cargo space than the smaller EV and he quickly answered: “it doesn’t”. He explained that the way the SAE requires manufacturers to measure the rear cargo space is to measure the height of that area directly above the rear axle.

That made the official cargo volume calculation slightly less for EUV. However, Short explained that you can actually fit a good deal more cargo in the EUV, as they have tested it in many ways. 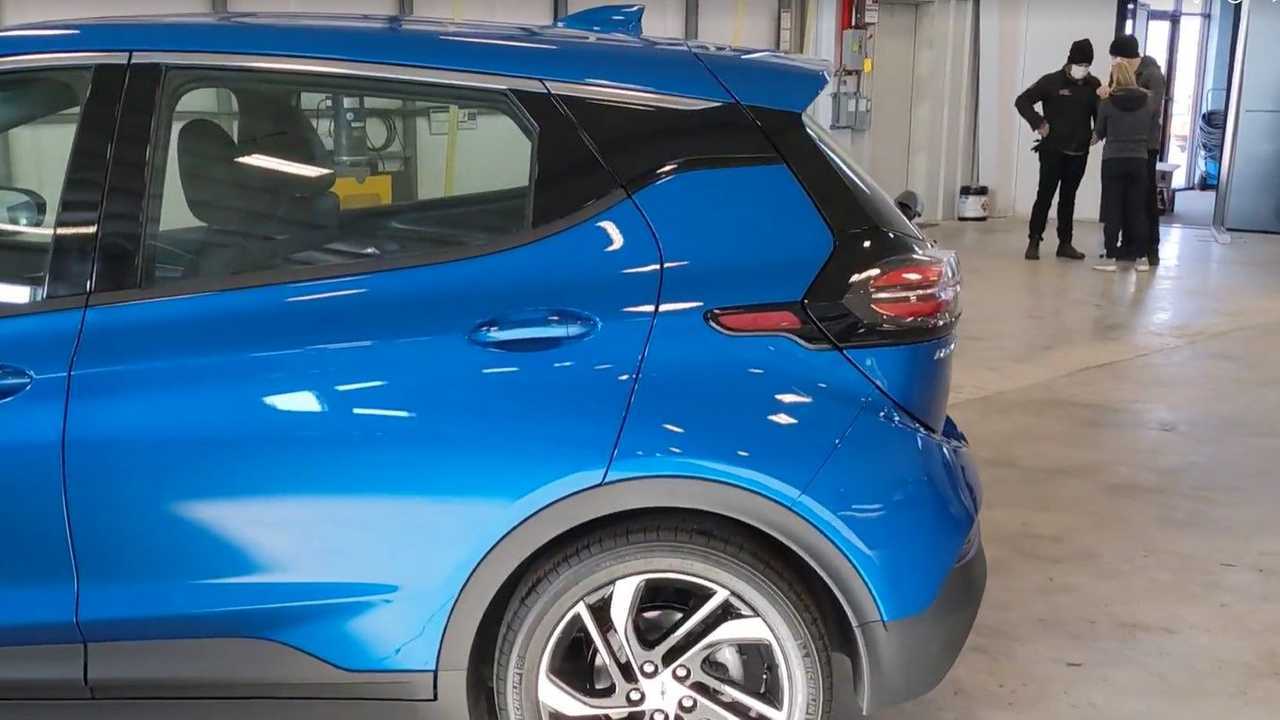 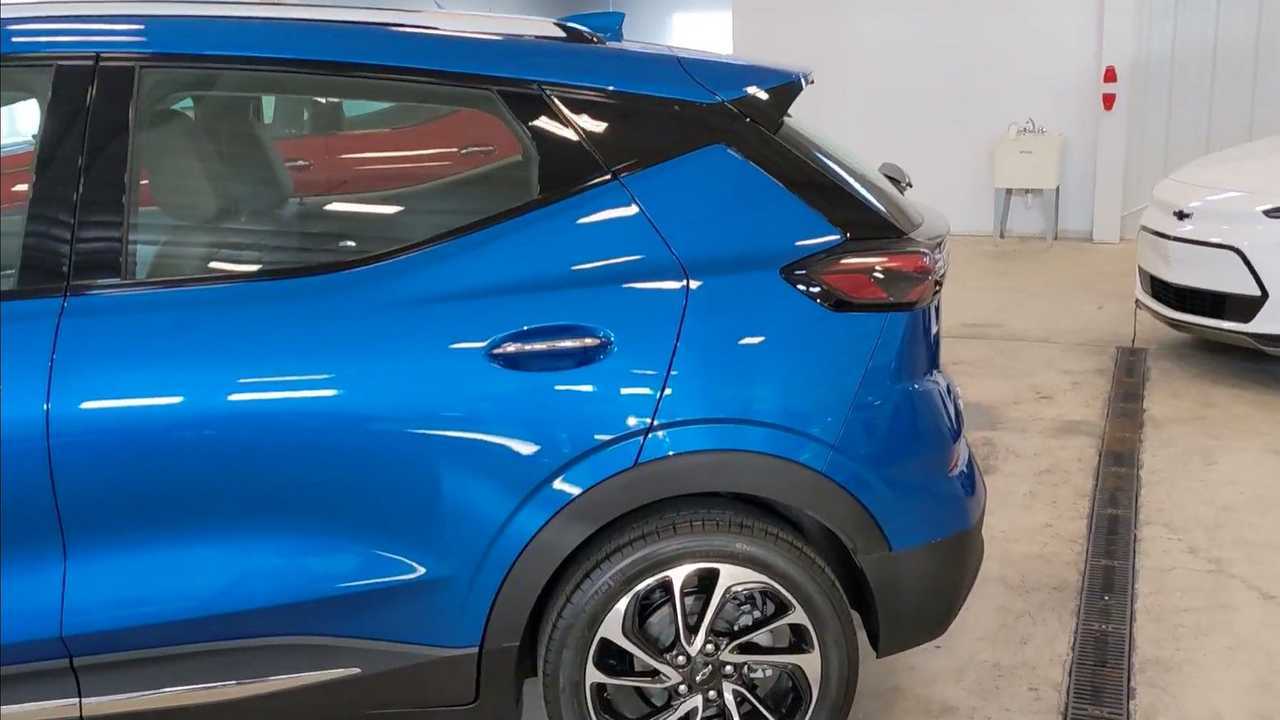 Both vehicles use the same 200 hp (150 kW) electric motor, which has 266 pound-feet of torque (360 Nm), and have the same 288-cell (LG Chem) lithium-ion battery pack. The 90 lbs of extra weight that Bolt EUV carries around gives it nine fewer miles of range (250 mi) compared to the Bolt EV’s 259-mi EPA range rating, and a slightly slower 0-60 time of approximately 7 seconds.

Personally, I couldn’t really tell the difference and the EUV felt as quick and as responsive as I remember to Bolt EV feeling when I last drove one. However, it’s been about 6 months since I last drive a Bolt EV. Even though there was a 2022 Bolt EV at the media event, we were only allowed to drive the Bolt EUVs, as the Bolt EV they had onsite was a pre-production version and not cleared for non-GM employees to drive.

The Bolt EUV (not the Bolt EV) is available with Super Cruise, GM’s advanced driver’s assist system. I was able to use Super Cruise for a while and it performed pretty well. I did have a problem initially with the system, though. On the first half of the drive, I was wearing my mask. I did so because we were told when we arrived that we needed to wear our masks for the entire media event.

Super Cruise doesn’t work well when the driver is masked up!

So when we reached the half-way point of the drive we all stopped to take pictures and grab a coffee, I told Short that Super Cruise kept disengaging for me – it wouldn’t stay on for more than a minute or two without shutting off. He immediately asked if I was wearing my mask while driving and I told him I was. He said that was the problem, and told me I could take the mask off on the drive back (we were all alone in our vehicles).

Evidently, my mask was preventing the camera system that monitors the driver’s behavior from reading my facial expressions and will not function without the ability to do so. Without the mask, the system worked fine. InsideEVs Kyle Conner was at a different Bolt EUV drive and he’s doing a deep dive video that’s all about the Bolt EUV’s Super Cruise, so keep an eye out for that.

There was a refreshed 2022 Chevy Bolt EV on hand, but we couldn’t drive it

The interior is all-new for the 2022 Bolt EV, and shared by the EUV. It’s a big upgrade and the interior appears more consistent with other Chevrolet offerings. There’s still a lot of hard plastics like the current Bolt EV has, but it all seems to fit together better. It also doesn’t look like the designers were aiming to make a futuristic-looking dash, and went with a more conventional design, and it works.

The front seats have been redesigned and are much more supportive than those on the previous Bolt EV. The front seats have been one of the most-criticized features of the Bolt EV, and Chevy listened and upgraded them for 2022. While they are an improvement, I still think they could (should) be even more supportive, as they continue to be rather narrow and lack adequate lateral support.

Both versions of the Bolt have a new one-pedal driving button on the center console and the regen-on-demand paddle on the steering wheel that is on the previous-generation Bolt EV. These two features combine to give the Bolt EV and EUV perhaps the best regenerative braking system available in any electric vehicle today. They allow you to use as little or as much regenerative braking as the driver likes and you can easily drive all day without ever using the friction brakes if you so desire.

The Bolt EUV is a bigger, and even a better Bolt, in my opinion. It’s larger, can accommodate more cargo, has a much more comfortable rear seating area and you don’t have to sacrifice much range or performance. At a starting price of $33,995, it’s only $2,000 more than the Bolt EV and we believe that’s money well spent.

However, there are two relatively big misses that Chevrolet whiffed on. First, this kind of EUV, or electric crossover, whichever you choose to call it, would be more appealing to many families if it were offered in all-wheel drive. Even though a front-wheel-drive vehicle with good winter tires can perform as well, or nearly as well, in the snow and ice as an all-wheel-drive one can, many customers feel better with AWD, and won’t consider a vehicle that doesn’t have it.

For that reason, we wish that the Bolt EUV was offered an AWD option, as both the Volkswagen ID.4 and Ford Mustang Mach-E do.

Secondly, the Bolt EV and EUV are both limited to 55 kW DC fast charging, which for 2022, isn’t just bad, it quite pitiful. The large 65 kWh battery will take so long to charge, that Chevy doesn’t even want to list it in the press materials. All I could find was the Bolt EUV can add “Up to 95 miles in 30 mins.” on a DC fast charger. Every other OEM lists the time the vehicle will take to charge from 5% or 10% to 80% on a DC fast charger, so customers can have an idea how long they may need to stop while on a road trip.

The Bolt EUV will probably take over an hour to charge from 10% to 80%, and that’s going to really slow down road trips. However, we realize many Bolt EUV customers may not need to take the vehicle on long trips so for them it won’t really matter. However, we’d really like to see GM keep up with the trend of offering at least 100 kW DC fast charging, as just about every other new EV coming to market offers.

So check out the video and let us know if you agree. Is the 2022 Bolt EUV a better overall package than the Bolt EV? As always, let us know your thoughts in the comment section below.

This Is The One You Have To Watch